Welcome to KMQ, the K-Pop song guessing game. Type ,play while in a voice channel to begin a game of KMQ! The bot will automatically start playing a random song, and the first person to type in the correct guess will win a point.

Use ,options to see all the options you can change to make your perfect game!

Get a hint for the current song using ,hint.

Start a vote to skip the current song using ,skip.

A game of KMQ can be ended by typing ,end, and a winner will be announced.

See the latest updates to KMQ with ,news.

We update our songs frequently! Expect to see songs on the bot the same day they release on YouTube! KMQ offers different game options to dynamically narrow down the selection of songs based on your preferences. The current game options can be viewed by using ,options or simply tagging KMQ Bot.

Use ,help [command_name] for details and examples for every bot command.

For each command’s usage, arguments:

If no arguments are passed, the game option is reset to its original value. To reset all options, use ,reset. When applying a new game option, the newly updated option will be bold in the bot’s response. To learn more about how to use a specific game option, check ,help [option].

Setting this option “limits” KMQ bot to the top most viewed beginning_limit music videos out of the total number of songs. Increasing the limit allows less popular songs to play; decreasing it restricts it to more popular songs.

Setting the groups option limits the selection of songs to those belonging to the artist specified. For instance ,groups blackpink, itzy, fromis 9, bts will exclusively play songs from those four artists. You can view the list of groups names via the link in ,help groups. Make sure to separate the groups with commas. 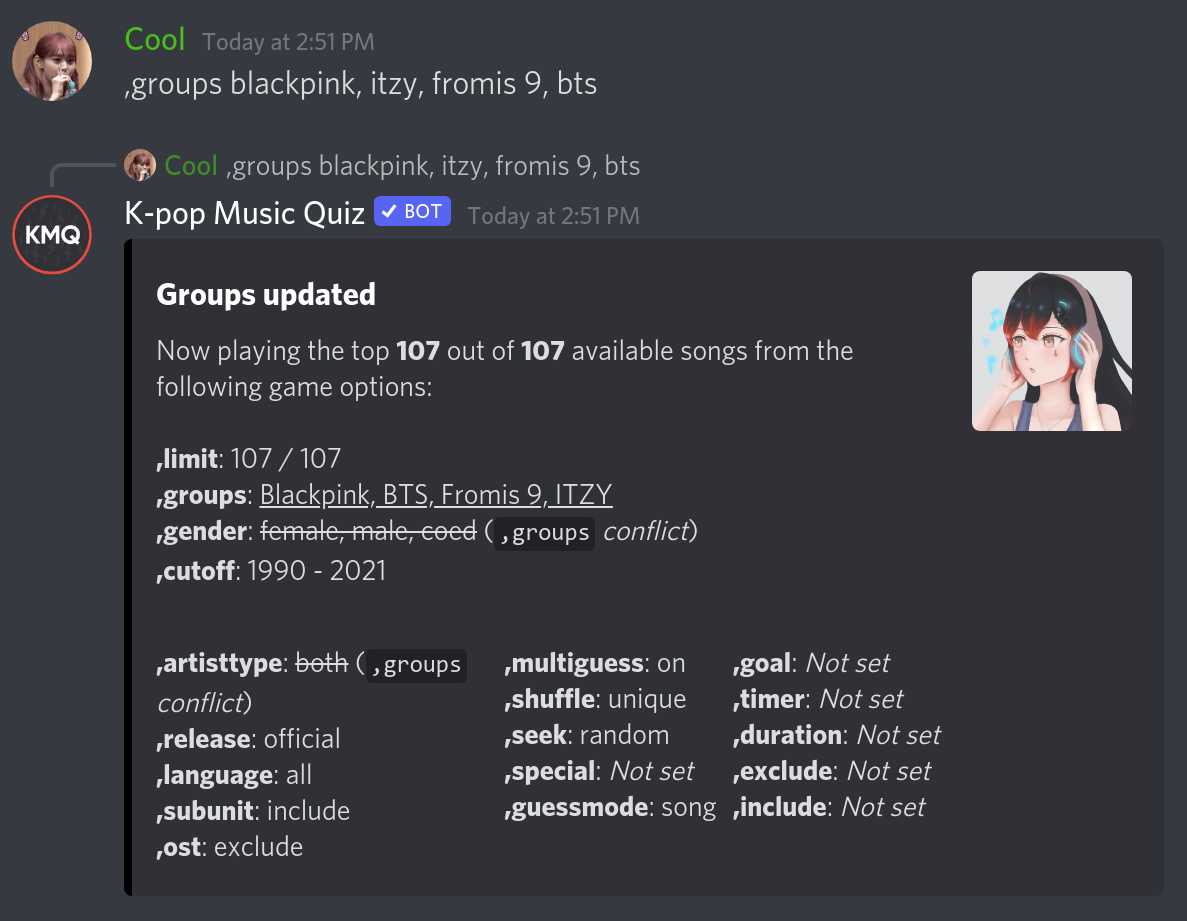 Setting a gender specifies the gender of the groups you’d like to hear from.

male, female, and coed can all be used at once (,gender male female coed), but alternating must be used on its own.

Note that ,groups and ,gender are incompatible with each other. If you wish to continue using ,gender, reset ,groups first.

Want to control whether groups or soloists are exclusively played? Check out ,help artisttype. 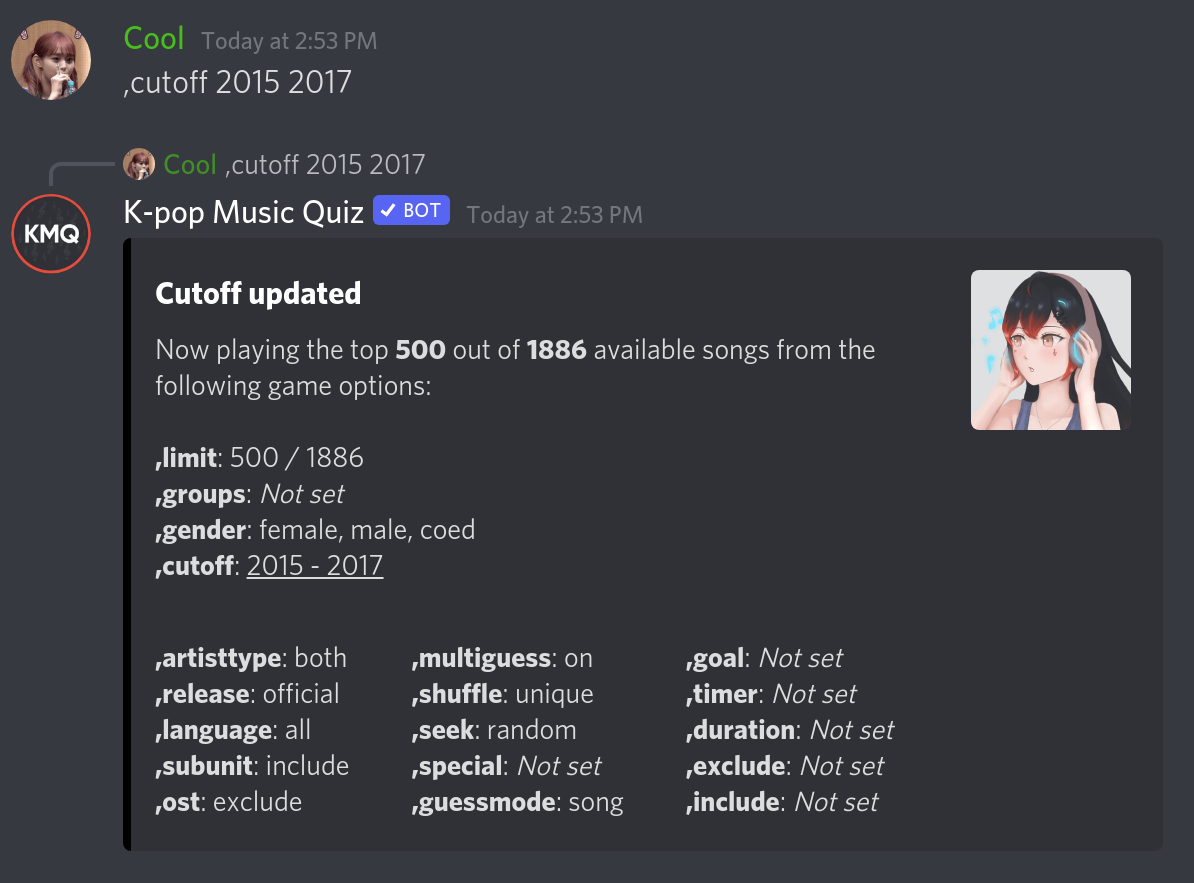 Setting the seek type changes which point in a song the bot starts playing from. 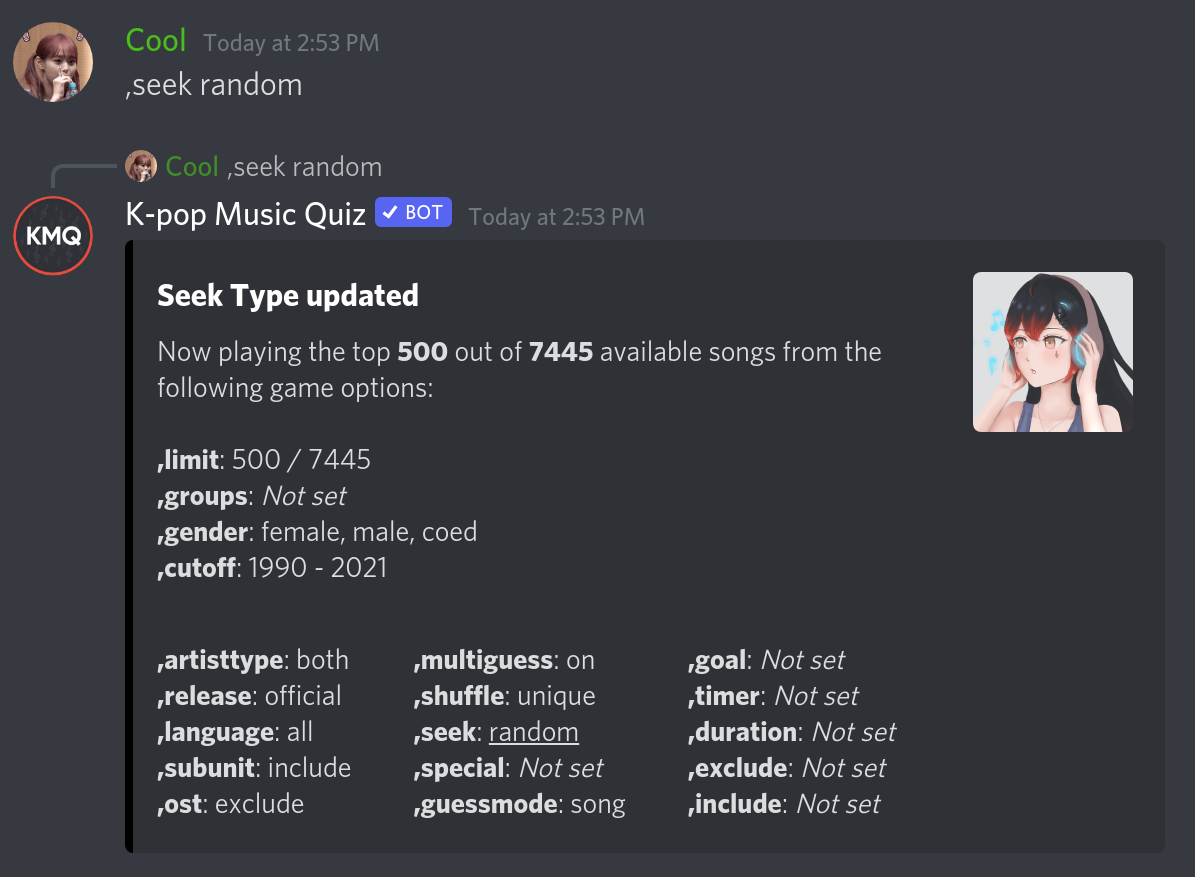 Setting the guess mode changes the objective of the game to guessing the name of the song, the artist, or both. 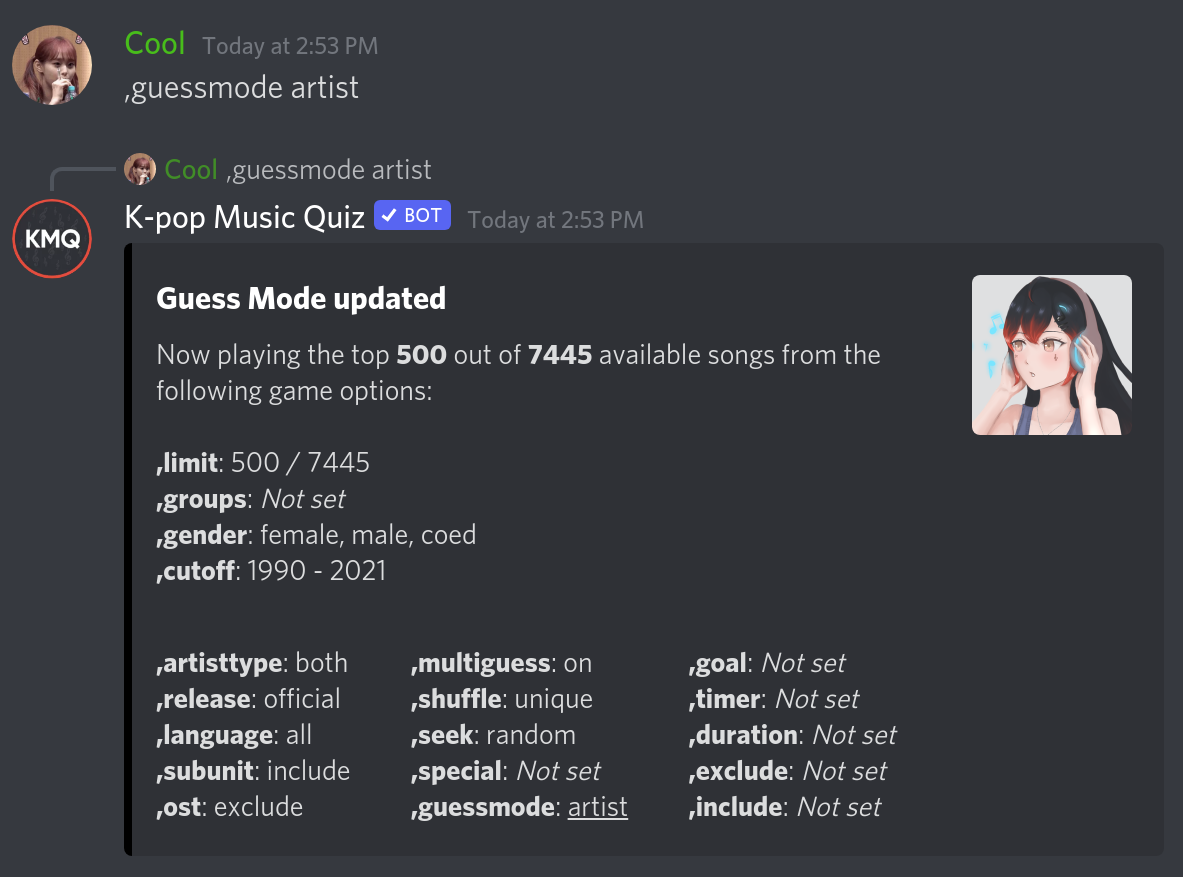 Setting the exclude option ignores songs by the specified artists. For instance ,exclude Day6, Momoland ignore songs by those two artists. You can view the list of groups names via the link in ,help exclude. Make sure to separate the groups with commas.

Similarly, to force groups in to the game regardless of the current options, use ,include. 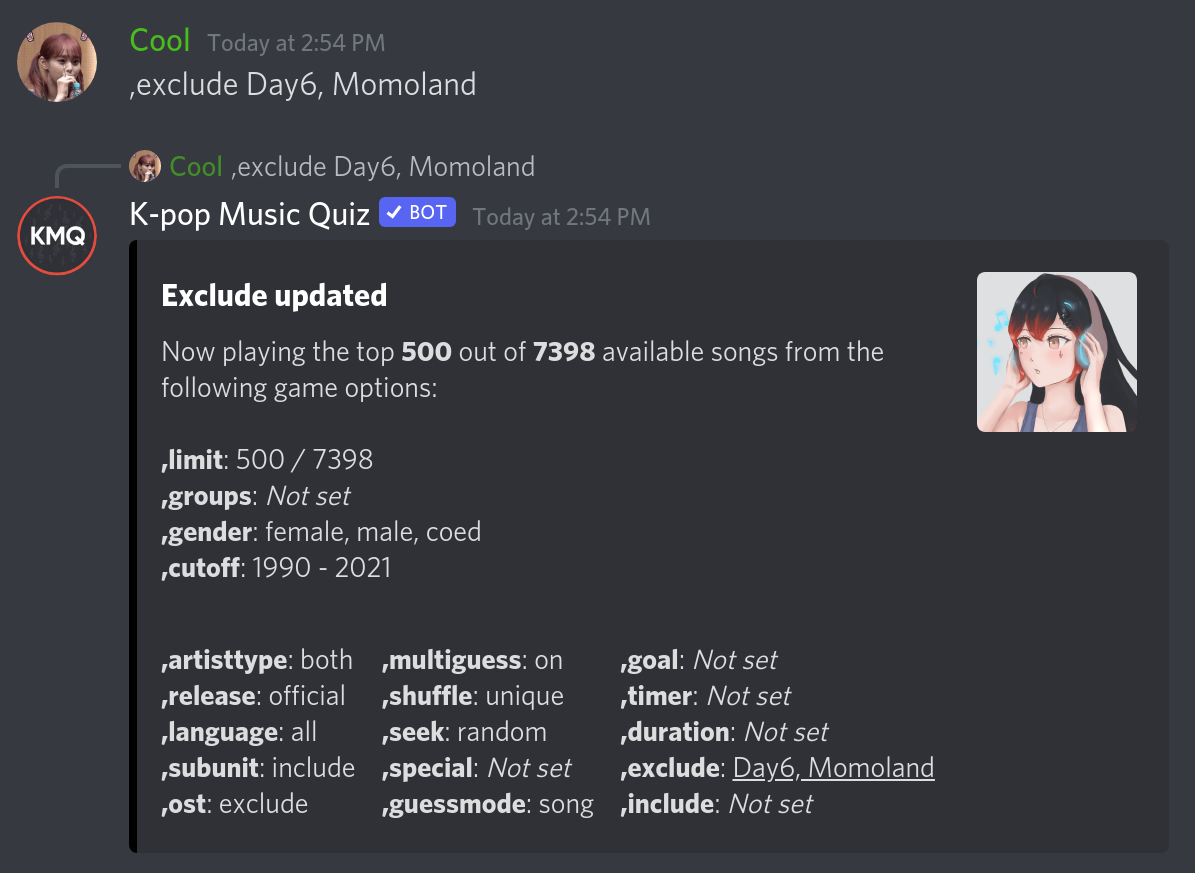 Setting the goal ends the game when the given goal score is reached. For example, if a player were to use ,goal 50, the first player to 50 points would win the game (,end is called automatically).

To disable a goal, use ,goal. 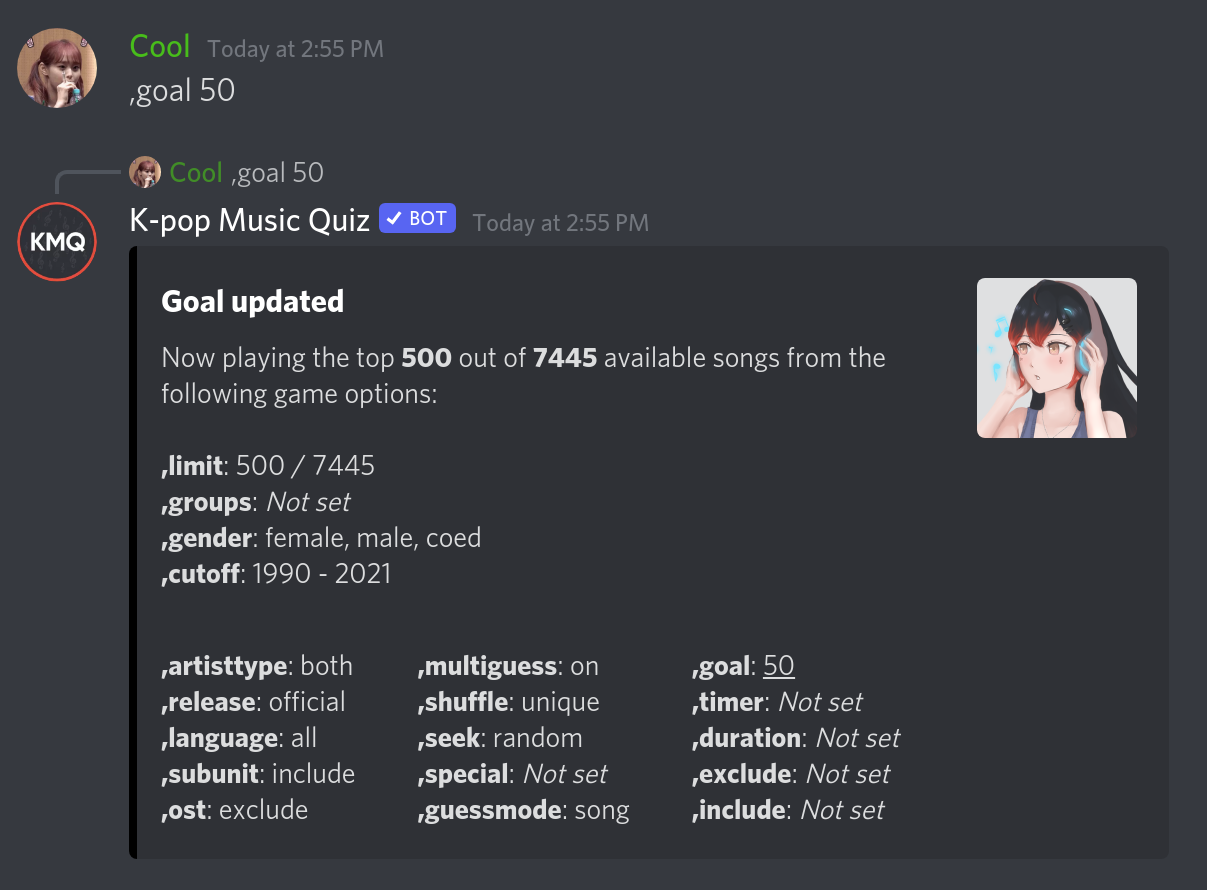 Setting a timer limits players to guess in under time seconds before the round ends automatically. Once a user gives a valid timeout, the timer will start at the beginning of every round. If no one guesses right in the allotted time, the round is over.

Set the timer to 10 (5? 3?) seconds and face off with your friends to see who the ultimate KMQ champ is!

Alternatively, set it above 30 seconds and avoid the ,skip spam.

To disable a timer, use ,timer. 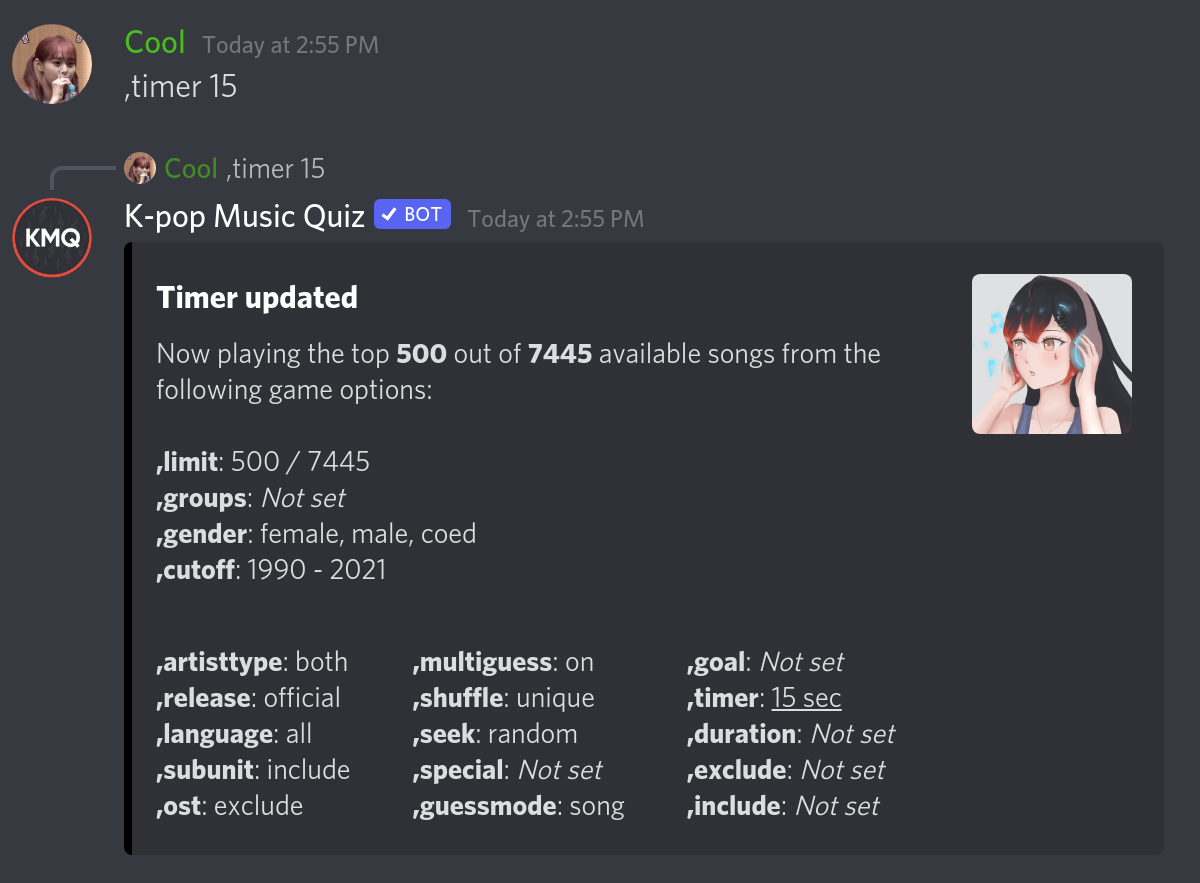 Setting the ,shuffle unique plays through every song in your options once before any are repeated.

With ,shuffle random, songs are randomly chosen from before every round, so some may repeat depending on the total amount of songs. 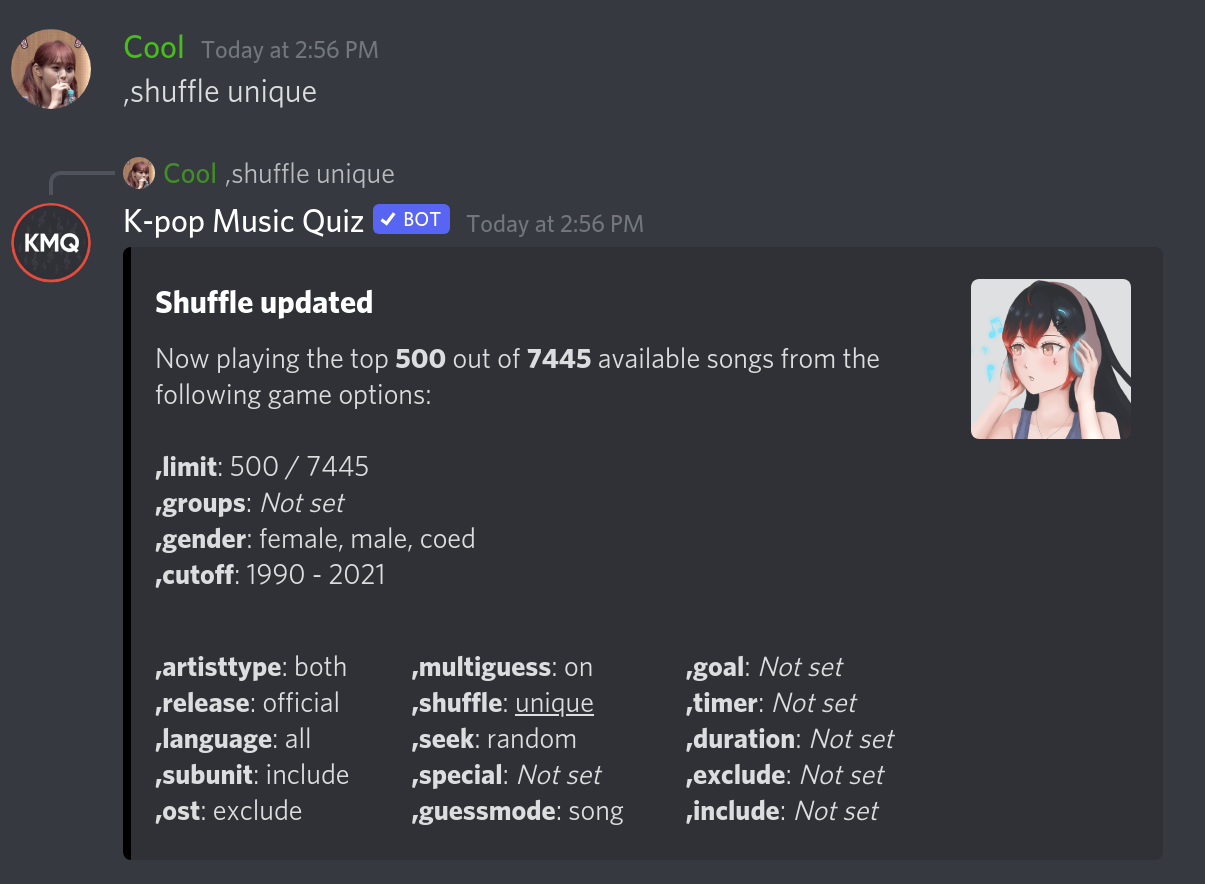 Use ,help [command_name] for more details for any of the following commands: